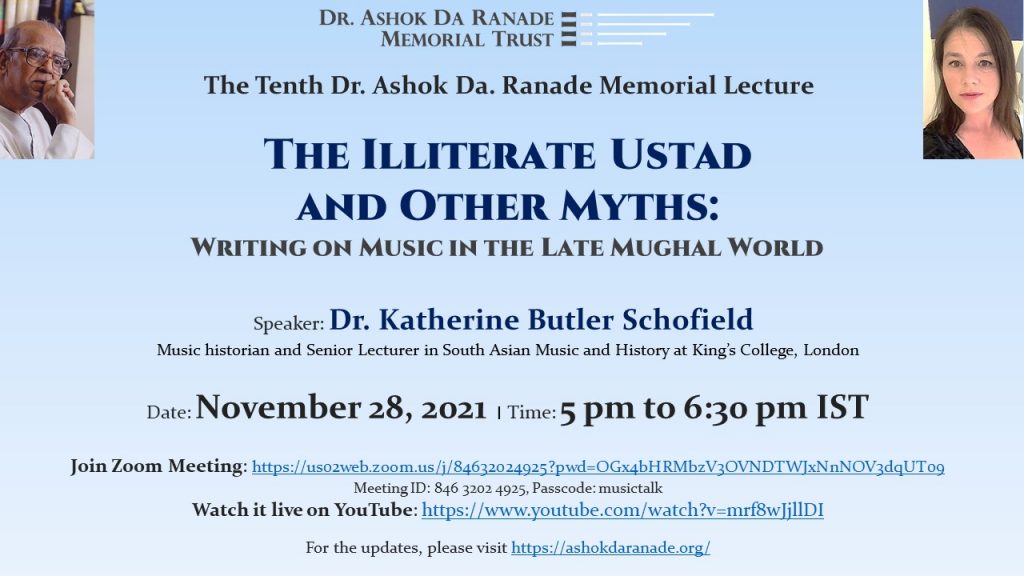 The Illiterate Ustad and Other Myths: Writing on Music in the Late Mughal World )

Dr Katherine Butler Schofield is a historian of music in Mughal and early colonial India based at King’s College London, where she is Senior Lecturer in South Asian Music and History. Working largely with Persian and Urdu sources c. 1570–1860, through stories about alluring courtesans, legendary ustads, and captivated patrons she writes on sovereignty and selfhood, affection and desire, sympathy and loss, and power, worldly and strange. Dr Schofield is the co-editor of two volumes of essays: Monsoon Feelings; A History of Emotions in the Rain, with Imke Rajamani and Margrit Pernau (Niyogi, 2018); and Tellings and Texts: Music, Literature and Performance in North India (Open Book, 2015), with Francesca Orsini. Her latest book, Music and Musicians in Late Mughal India: Histories of the Ephemeral, 1748–1858, will be out with Cambridge University Press in 2022. Dr Schofield is a keen podcaster, and you can listen to her Histories of the Ephemeral series wherever you get your podcasts.

One of Dr Ashok Ranade’s major contributions to the field of Indian musicology was his seminal book, On Music and Musicians of Hindoostan. While Dr Ranade was a champion of the intellectual depth and virtuosity of the sina-ba-sina mode of transmission of the guru-shishya-parampara, he also made the fundamentally important point that oral and literate traditions in Indian music have not historically been in opposition to each other, nor have they ever been mutually exclusive.

As if to prove his point, shortly after the death of the protagonist of one of Dr Ranade’s chapters, the great Hindustani singer Ustad Faiyaz Hussain Khan-sahib, the late Professor R C Mehta received a Persian manuscript that had been in the Ustad’s possession. It turned out to be one of several versions of a music treatise written in the first decade of the nineteenth century, in Persian and Brajbhasha, by a hereditary ustad, Khushhal Khan ‘Anup’, whose father Karim Khan had been the special disciple of Firoz Khan Adarang.

What role did this manuscript play in Ustad Faiyaz Khan-sahib’s understanding of his tradition of Hindustani music and musicianship? Did reading it inform his performances? COULD he even read it? Didn’t Bhatkhande tell us the Muslim ustads of Hindustani music were illiterate—ignorant of authoritative theoretical writings on music and therefore susceptible to passively transmitting changes to the tradition they were entrusted with embodying?

In this lecture, I will discuss several writings on music in Persian and Brajbhasha from late Mughal India c.1666–1858 that demonstrate that the illiterate ustad is a myth. Far from being illiterate, many hereditary ustads in the lineages of Tansen and Sadarang right down to the twentieth century were literate in the written discourses of Indian music, and highly conscious of the need to assert their authority over their traditions through writing. The literate ustad changes the way we understand the battle for Hindustani music’s modern soul in the early twentieth century.
– Dr Katherine Butler Schofield

For the updates, please visit https://ashokdaranade.org/